God, a loving and compassionate Father

There is such a strong link between Marthe Robin and St Thérèse of Lisieux that it can be referred to in terms of a friendship or spiritual kinship.

Marthe was 29 years old when she wrote these words about the Little Flower, Thérèse:
"I often talk about her. For me, she is a "big sister" and very close friend, whose loving doctrine was such a blessing for my soul during the period when I experienced a great darkness and an equally great solitude. Her life, in 'Story of a Soul', opened sometimes at random, was a source of fitting solutions full of insight.”

As for Thérèse of Lisieux, she could have said many of the phrases that Marthe put in her journal. A similar vocabulary, a common "doctrine" that is simple, trusting and surrendered to the God that they knew was so close to them and so loving.

The visits of St Thérèse

Let's back up a little in time... The "Story of a Soul" spread very quickly throughout France, one year after the death of Thérèse of Lisieux. Thus, the parish library of the small village of Châteauneuf-de-Galaure had two copies, not to mention a few books on the spirituality of Thérèse.

At about the age of 20, Marthe wanted to give her life to the Lord by entering the Carmelite Order, like Thérèse. She had spoken about it to her parents, but her request had not been successful. However, Thérèse continued to be part of Marthe's journey. Like her, Marthe would write an "act of surrender and self-offering to the love and will of God". Thérèse would also visit Marthe three times while she was in a coma in 1927. Marthe simply said that Thérèse had told her that she would not die yet, but that she would continue her mission throughout the world. With humour, she would add:  "The little rascal, she left me everything!”

A mission that continued

In her youth, Marthe thrived on the thinking of Thérèse, absorbed it and then lived it out. Consequently, with Thérèse, Marthe knew that Jesus is with us in the smallest things of life; that the only thing that counts is love; and when we are confronted with adversity or temptation, the best is to live through it with simplicity…

A portrait of Thérèse in Marthe's room bears witness to Marthe's affection for her "big sister" of Lisieux. 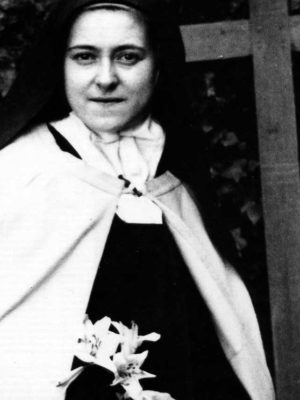 Words of Marthe that Thérèse would not have disowned!

For Marthe, to live is to love... With these few words, one can see how close she was to St Thérèse of Lisieux:

May my life be a song of love and gratitude and nothing else, and let me live as I dream of dying: simply by love.

No, nothing is impossible to love! Love makes everything possible, easy and simple.

The reason why so many Christians think that holiness is a state specially reserved for superior souls, and only for the few, is because they do not see it in all its simplicity and its beautiful truth. […] Yet, true holiness is contained primarily in perfect charity and this perfection can be attained by everyone without extraordinary graces, without special favours and, especially, without amazing works, but by being, with St Thérèse of the Child Jesus, ‘a little soul’ that trusts in God and is entirely surrendered to love... a praying contemplative soul.

"We must console Jesus with a childlike love, be like infants who are capable of only one thing: loving. Being little and uncomplicated like a child is what attracts God: when we are infants, God does everything. What am I: a very poor little soul whose mark is simplicity. What I want: to love and to get all those who have not experienced the joy of love like me, to love the Good Lord.

May I live by love, in love, die of love and may the last sigh of my heart, the last song of my soul, be an act of the purest love.

To love the invisible God, to love him with a supernatural, generous and completely sacrificial love, is simple and easy. All you need to do is humble yourself, acknowledge your extreme need as a human being and rely on God alone; you need to make your smallness the basis for your greatness. God raises us up by emptying us!