On 7 November 2014, Pope Francis authorised the Congregation for the Cause of the Saints to promulgate a decree recognising the heroic virtues of Marthe Robin (1902-1981), a French layperson, founder of the Foyers de Charité. This is a key step in the beatification process.

What does it mean to be "heroic in virtue"?

A person who has died and has a saintly reputation is said to be venerable when that person is recognised by the Catholic Church to have been "heroic in virtue".

Being "heroic in virtue" refers to the person's efforts to become a better person, welcome the grace of God, practise charity, conform to the gospel and be faithful to the Church. This criterion is much more important than the extraordinary, even miraculous, deeds performed during the lifetime of the Christian whose cause is introduced.

By proclaiming Marthe Robin to be "venerable", the Church is advocating the way in which she lived the theological virtues (faith, hope and charity) and cardinal virtues (justice, prudence, fortitude and temperance) as a model for Christians. It recognises the exemplary value of Marthe's life, which was entirely given up to God and to other people without regard for herself as she took on the adversities of life with a strength that cannot be attributed to human courage alone.

How was Marthe Robin declared "venerable"?

The process began five years after her death
Marthe Robin died on 6 February 1981. Five years later, the Foyers de Charité asked the bishop of Valencia, Bishop Marchand, to open a process of beatification. The bishop appointed Fr Ravanel, a member of the Foyers de Charité, as postulator of the cause. The diocesan inquiry for the beatification of the "Servant of God" began in 1986.

The diocesan inquiryTo carry out this inquiry, two experts (a theologian and a historian) were appointed in 1988. The first element taken into consideration was Marthe Robin's saintly reputation among the Christian faithful. Then, between 1988 and 1996, more than 120 witnesses and experts were consulted. At the end of this inquiry, a 17,000-page document (critical biography, witness statements, relevant writings and other documents) was submitted to the Congregation for the Cause of the Saints in Rome. At this point, Marthe Robin was known as a Servant of God.

Examination by the Roman Congregation
On 24 April 1998, a decree of the Congregation for the Cause of the Saints confirmed the validity of the diocesan inquiry. The Roman authorities then prepared the documentation to be submitted for examination by the historians and theologians, who give a critical opinion, and then by the Promoter General of the Faith – formerly known as the devil's advocate – whose role is to present any arguments against the beatification or canonisation. The cardinals and bishops deliberate last. The Positio, a 2,000-page summary of the beatification file, which presents the results of this diocesan inquiry, was completed on 6 May 2010.

Heroic in virtueThe congress of cardinals and bishops then decides whether to refer the case to the pope for the declaration of heroic virtue, that is to say, "the perfection of human and Christian love, and its deployment throughout life". Marthe Robin was declared venerable by Pope Francis on 7 November 2014. Sacred Heart of Jesus,
You revealed to Marthe your great plan of love and of life, in order to draw to yourself those who seek you or have forgotten you, and so that her unceasing self-offering of compassion and mercy may contribute to a new Pentecost.
We ask that her beatification by the Church may serve to make you known, you the living Word of love and peace, and that through the intercession of Mary, we may follow her example in order to respond to the appeals of our brothers and sisters.Deign to grant the prayers we make you through your servant Marthe...
so that your joy and your glory may be made known,
Amen.

What are the next steps?

Recognition of a miracle
The Postulator of the Cause of Beatification, Fr Bernard Peyrous, submitted a file in Rome presenting a miracle obtained through the intercession of Marthe Robin. This miracle was initially the subject of a diocesan inquiry and will be examined by the Roman Congregation for the Causes of Saints using testimonies, documents and scientific expert assessments.

Beatification
If the commission in charge of this examination recognises the validity of the miracle, the pope can then decide to declare her "blessed" on a date of his choice. 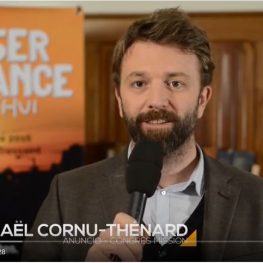